Part 2 (Fiction and unneeded for understanding this)

Stumble Saves: Every player character can secure a single item that cannot be lost from their person due to a Stumble. Non-breakable items lost in a Stumble can be retrieved in most circumstances, but it means Pushing into the Brush for a day.

d6 Travel Die: Roll once for each day traveled unless told otherwise.

Last time we focused on Far Albion and reasons to go there. To get a little more in-depth, Far Albion is definitely a fantasy British Isle. In this world, there is a great forest in the middle of the area of England and Wales that is called the Eldwood. This is the first forest in all Creation according to the myths of the Elves. There live the Wyld Elves, the elves that have lived in the Wood since the beginning of time and have maintained the Elven traditions since their earliest days, though schisms and complexities have emerged just like in all civilizations that have endured the ages though these are to be discovered. They claim the Eldwood solely for their people and have brought doom on all others that would try to establish themselves on their land.

This time we will flesh out the role in the world for the player characters and give some perspective of the wider setting.

The Fiefdoms of Far Albion:

Four Kings will be the main city of the campaign. It is also the oldest human settlement on Far Albion and home of the first university in the world. Four Kings University's Monk-Librarians maintain an incredibly impressive library: really a treasure trove of civilization, unmatched in the world, though the scholars and philosophers of the Continent look down on the Librarians for their secrecy and reluctance to share their knowledge or advance academic pursuits.

Each settlement on Far Albion is ruled by its own lord or master. They hold it in fief for King Gwardor, a figure of dubious existence, who once united both elf and man under his divinely-mandated rule of Albion. It is said he even fought and prevailed over the Empire which once ruled over the Continent. Though this figure might simply be a product of myth, he is an essential figure for the political unity of the Fiefdoms.

Four Kings is also the main port of the region where travelers of all sorts come and go. This is where all the dreamers, explorers, and ruffians gather with their ambitions for braving the wilds. 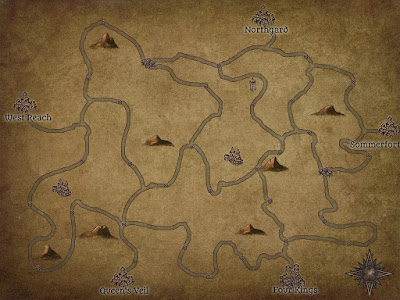 Just like Far Albion is a fantasy Britain, the Continent is fantasy continental Europe salvaged together from various times in history. The age of exploration and colonization is on the horizon. There are new worlds beyond the ocean and the many powers of the Continent would love to use Far Albion as a base of operations for their imperial ambitions, but these mysterious islands have proven difficult to tame. If the secrets of the Eldwood could be discovered and harnessed, they might finally get their wish. The Wyld Elves will not sit idly by and allow this to happen, however.

The Allied States of Mercia (Italy):

The various city-states of Mercia are gathered into a loose economic confederacy. Mercenary armies essentially secure peace by their loyalty to profit. Bidding wars replace actually wars and most conflicts end before they begin, resulting in very little real change.

Mercia is the heart of the renaissance which is beginning to bloom on the Continent. The scholars of Mercian Universities are renowned as the greatest in the world compared only to the Court Philosophers of Gallia. Science, the arts, and philosophy advance in a measured and civilized fashion, attempting to once again attain to the classical ideals of the Empire of the past.

The Kingdom of Gallia (France):

Think pre-Revolution France: an entrenched and increasingly decadent nobility, a highly stratified society, believing that all people must maintain their place in the divine mechanism, and a center of culture for the Continent.

The King of Gallia's Court of Wonders is where all the artists, philosophers, and madmen of the world gather to entertain and delight the King. A great deal of invention happens here, all generously patronized by the throne though there is little of the structure that the Mercian Universities have. Their mages explore increasingly dangerous magicks without restraint, their philosophers increasingly throw off all the shackles of sensibilities, and their artists increasingly rebel against all decency.

The nobility like to go out in gaudy masks that do little to hide their identity. The main struggle in their lives is how they might best their rival nobles in fashionability and overindulgence such that they might maintain their position int the King's Court.

Meanwhile the poor are oppressed beyond belief and toil in misery while the nobility and the corrupt Gallian clergy look on approvingly as all cogs play their part in the celestial clockwork. Revolution is definitely afoot and groups plot to begin it.

The Mercantile Union of Daneland (The Netherlands):

There is no traditional government in Daneland. The old nobility has been replaced utterly by the Guilds. Guilds run everything and involvement in the Guilds is all that matters. Profit is the name of the game and the whole country is in a mad dash to discover unopened markets.

Capitalism is king, but it is hardly a Libertarian ideal. The Guilds are basically cartels and try to corner markets and will use brutal means to keep control. The shadow wars among the Guilds have become so all-consuming that every aspect of life has become a matter of espionage, counter-espionage, and endless layers of distractions and tricks. The Guilds have entire languages of codes and any simple errand by anyone could be apart of a 4D Chess game by Guild hierarchies.

The Confederacy of Starkland (Germany):

Yet to be united, the city-states of Starkland are held together in a confederacy, though the ties are becoming stronger as the sleeping giant has begun to recognize the might of its united power.

This is a land of dedicated craftsmen, theologians, and military precision. This nation, more than most of the Continent, has had to deal with its own fair share of dark forests and supernatural horrors. Its people are considered hardened and impossible to shake. This might also be helped by the large Dwarf population.

The Empire of Russoslavia (Russia):

In the frozen north of the Continent live a hard people, weathered and strengthened by the environment of their homeland, but it is an advanced and ancient culture nonetheless who has taken a divergent path from the Western Continent. Their eastern church differs in many ways and does not obey the hierarchy of the western church.

It is said that you must drink a full pint of Vodka and wrestle a bear shirtless to gain citizenship.

Since this is alternate Europe, Christianity is the name of the game. Rather than coming up with a weird replacement, I thought it might be interesting to simply have actual Christianity as the dominant religion of this world. Of course, this Christianity will closely mirror Catholicism though I reserve the right to mess with it because I am a red-blooded American Evangelical Christian and I am not terribly educated in all things Catholic.

Folk religion for elves and dwarves will exist, as the elves look to maintain the faith of their Wyld cousins. Dwarves have a faith-based around ancestor worship. Though most Dwarves and pretty much all Halflings have integrated quite well into human civilization and adopted Christianity.

In Elven legend, certain elves were exiled from the Eldwood and these would become the exiled tribes, those elves that mostly fled to the Continent or be forced to live among humans on Albion. Some of these Elves endeavor to hold true to the old ways, often traveling around like Gypsies, while others have adopted the ways of humans or come up with new ways.

Elf player characters will come exclusively from the exiled tribes or the Monkey Tribes as they as sometimes called.

Likely from Starkland or Russoslavia, though a fair few also live in Daneland.

Halflings are found in large numbers in Daneland or as Gallian peasants.

Most magic users will be attached to the Mercian Universities, Four Kings University, or the Court of Wonders. There are secretive individual wizards and witches hiding away in the forests of Starkland or among the icy wastes of Russoslavia. Nobles of all kinds tend to dabble in magic with some even having family traditions regarding it.

Most Clerics will be Christian clerics of either the Western or the Eastern Church. Four Kings University is also a highly religious institution so Clerics might be attached to it. 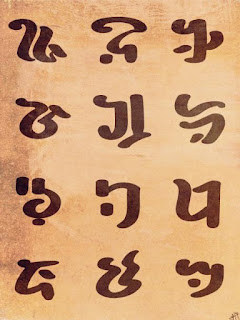 My friend and repeat commenter, Max Cantor, brought up the idea that each class ought to have some Wyld-Crawl Ability attached to it. This is a fantastic idea and one I will try to do something with here:

On the Trail We Blaze (Fighter): When Fighters hack their way through the brush, they create a permanent path. When you go Into the Brush, your path stays and you may take this path again and again if you want you choose. You may also mark Supplies instead of taking Fatigue while going Into the Brush.

The Most Dangerous Game (Ranger): You may follow a trail Into the Brush with ease, taking none of the ill effects of going Into the Brush while following a creature traveling by foot. If you have identified a creature's material weakness (Like if a creature dislikes salt or garlic or a type of flower), you may mark Supplies to have a single-use of said material that you packed during downtime. Especially rare materials are not allowed.

Steel in our Bones (Dwarf): Dwarves cannot Stumble and have 5 extra Item Slots. A Dwarf also gains Advantage on Saves against weather effects. A Dwarf may mark Supplies to produce materials needed for repairing an item that they packed during downtime.

This Land is Mine (Elf): Elves feel a kinship with the land. They can sense disturbances both magical and mundane in the forest.

What about Second Breakfast? (Halfling): Halflings may mark Supplies twice at an evening's rest to cook an especially hardy meal that gives all companions 1d6 Temporary Hit Points for the next day. These stack on top of normal health and go away after a day. For parties of more than five people, Supplies must be marked thrice.

Prepare for the Worst (Thief): A Thief may mark Supplies to produce any of the following items:


A Wizard is Never Late (Magic-User): Through mathematic formulations, a deeper understanding of space, or wizard eyes, a Magic-User may take an hour and mark Supplies to examine a road and determine how long it will take to travel compared to other known roads.

The Journey Blessing (Cleric): A Cleric may bear the weight of their comrade's suffering. At a night's rest, they must mark Supplies and intone a blessing over the desired party members. The Cleric may then assume as many their levels of Fatigue as they wish, relieving the targets and gaining their Fatigue. 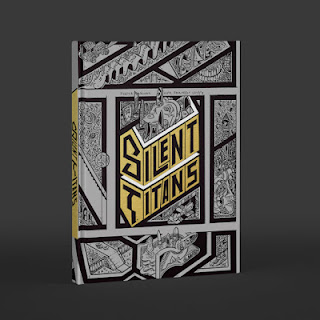 A Literary Analysis of Silent Titans by Patrick Stuart