These are meant to be supplementary magical items. They can aid weapons, magical or nonmagical. This way players don't have to choose between different magical weapons to get new magical abilities. Unless stated otherwise, all of these items could fit any weapon of their category: swords, daggers, ect. 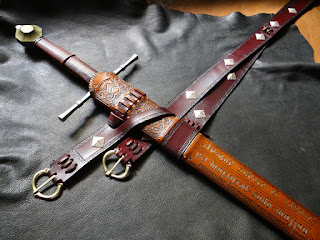 This scabbard of azure-dyed leather and steel has a disturbingly real human eye near its opening with ancient runes scrawled beneath it like tears. The scabbard is inhabited by the spirit of Sir Englemoore of Brightbane, a truly honorable and chivalrous knight who refused to pass onto heaven before he had fulfilled his oath to restore the Exile Princess Armorea to her throne.

A leather quiver with an exterior design like a very distressed chicken.
3: Dueling Glove of Saint Dickard the Swaggering

This holy artifact belonged to the Saint of Duelists and Bravoes. In his youth, he wandered the canals of his home city, indiscriminately picking fights with other rowdy youths, trouncing them every time. He gave up his life of violence when he entered the clergy, but he found a few times to use his skills for the church and a few more times because he was right miffed.
4: Pommel Grenade of the Grim Skall

Esoteric fighting manuals call for throwing pommels to "end him rightly." These instructions make much less sense without the proper hardware.

This black leather scabbard has a spinning display around its rim. As swords are added to its collection small black representations of each blade adorns its segments.

This scabbard is absolutely covered in shifting ads like a newspaper from Harry Potter. It also has a shiny brass coin slot near its rim.
7. The Shining Rag of Aggressive Cleanliness

A simple but immaculately clean white cloth for cleaning weapons. It is so clean that objects held near it become more clean overtime.
8. The Hive Scabbard

Golden interlocking hexagons cover the outside of this sheath.

This scabbard has a quill attached to it by a ribbon and a coil or parchment about its middle which seems to have neither beginning nor end.
10. The Thirsty Scabbard

A black leather scabbard with blood-red designs running in geometric lines from the lip of the scabbard to its point.
11. Bow Charm of the Lonely Messenger

An amulet in the shape of a silver ring with different strands of human hair coming off of it.
12. The Invisible Sheath

A sliver lined dagger sheath with a circular sapphire like an eye in its center.

An ivory quiver lined with falcon feathers and adorned with a falcon skull.

14. Charm of the Drowned Soldier

A locket containing a ruined picture of a beautiful young woman. Barnacles cover its outside and a severed violet tentacle clings to it.

A sheath made from an unearthly material. Blue veins cross over a smooth purple surface. A soft violet light undulates within like the beating of a heart.
16. Morphing Scabbard

This crimson leather sheath is lined down its middle with golden geometric runes
17. Silvering Quiver/Scabbard

This quiver/scabbard is made of white leather with a silver wave design.
18. The Hungry Scabbard

This red-flesh scabbard is dotted with eyes and its edge is lined with teeth. It whispers insistent demands for blood.
19. The Holy Pommel of Saint Cuthbert.

A golden pommel adorned with the image of the saint.
20. The Cocoon Sheath

This sheath looks like it was made out of strands of milky white silk. 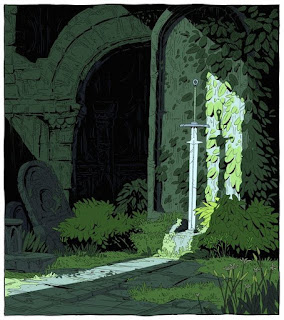