In an attempt to do some worldbuilding with a different focus for a new project, I wanted to focus not on a world but only on a distinct region. 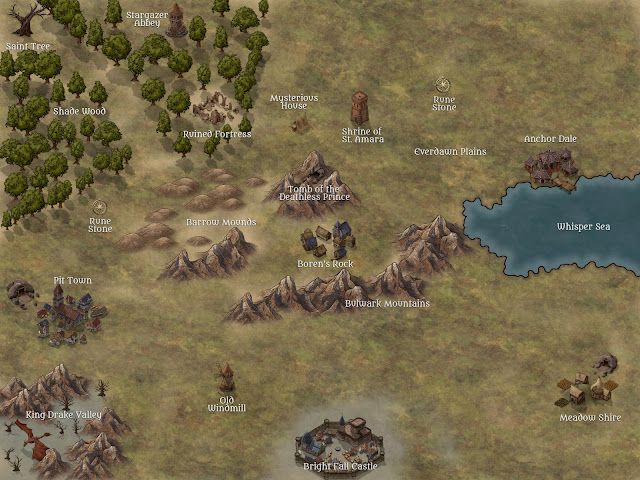 WIP Map made with Inkarnate

I've been seriously inspired by Elden Ring and the Soulsbourne franchise as a whole to the point where some of my concepts seem to have been more inspired than I even realized. Regardless we will push on. There are a few questions that I think are good to ask for Soulsbourne worldbuilding:

What deep sin has been committed?

What is the result on the world?

What ancient secret underlies all of this?

So question one: "What deep sin has been committed?"

The Dawn Lit Heights are rich with gold. It made the kings of the Gel'Thior dynasty rich for generations. King Grimlock Gel'Thior, the grandfather of the current king of the country of Afars, was greedy beyond what most men could dream of. He hoarded great piles of gold and yet he coveted all the more. He was possessive and self-absorbed above all things.

He decided he must even obtain the church. Gold has long been considered a heavenly metal, blessed by the light of the sun even in the deep dark of the earth, but King Grimlock uplifted the Cult of Gold, a religious group intent on discovering the heavenly powers of gold, and, for his patronage, the Cult was convinced to preach a kind of prosperity gospel, claiming the king to be a Saint of Gold, blessed by the sun, more blessed than all others for the wealth he claims. This was egregious to Eleem of Boren's Rock, who he pinned with a spear to a great tree in the heart of the Shade Wood. Saint Eleem was absorbed into the tree even as it would seem to wither and die. That day a curse fell on the land and the King of Gold began to deepen in his madness.

Chasing his wealth and his power, suitors came for his seven daughters. King Grimlock hated the idea that his precious daughters might be taken from him, yet they wanted to pull away from him, to marry these charming men. In the depths of his madness and possessiveness, he ate the suitors and daughters both. This final act of supreme greed finally broke his humanity and he transformed into a great iridescent dragon.

Unbeknownst to him or even to her, the least of his concubines was with child, a son who she bore with her as she fled from the destruction as the king's violent transformation tore down the castle and made the land around into a blasted wasteland.

"What is the result on the world?"

Afar has fallen much. Its great wealth mostly hoarded away in King Drake Valley, its people terrified by the dragon, the Dawn Lit Heights began to empty. Many people left the Heights altogether, even with so much gold still to be drawn up from the earth.

King Berrain Gel'Thior, the current king, has decided that the only way to return to glory is to actually follow in the footsteps of his ancestor, to become an even greater dragon, to maintain his mind through the transformation, and to begin the greatest golden age Alfar has ever seen.

Meadow Shire and Pit Town have been practically enslaved to his perpetual pursuit of gold. Boren's Rock remains free as it is an ancient freehold and sheltered by the Bulwark Mountains, but if King Gel'thior's prospectors discover gold near them, the townsfolk wonder if anything will stop him from enslaving them as well.

"What ancient secret underlies all of this?"

Gold in this nation is special. Gold is not special nor magical in other parts of the world, yet here it has a strange power. The Cult of Gold began as a group interested in exploring this mystery. It is known that there was an ancient civilization that once ruled over the whole continent, a civilization of death worshippers, or perhaps people who would do anything to escape death.

They found gold to be a perfect conductor of their magics, of the power of the Realm Beyond Death. The Cult of Gold believes that, for their machinations, their souls were imprisoned or perhaps preserved, in the gold beneath the earth.

That was a pretty big overview but I wanted to write down my thinking on this project. There are some gameplay things that will be helped with this. For one thing, it is an in-universe justification for Gold for XP. If the PCs bring it to any of the Glimmer Shrines, the priests or shrine maidens will offer up the Gold to the heavens and so bring down its power for the PCs.

I also really wanted to do a setting where the PCs had a really good reason to be hostile to the government from the get-go.

The Soup Witch will be a wandering encounter here for sure. 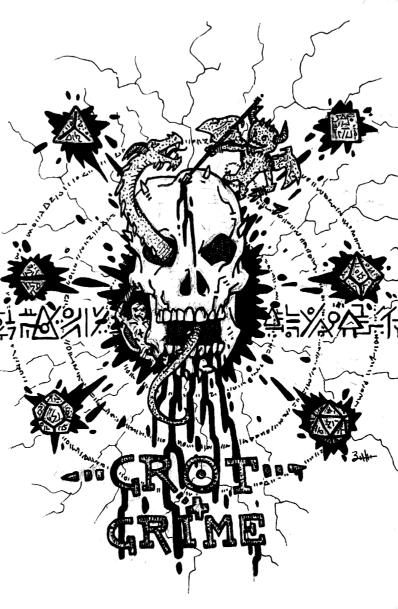