Of Flowers and Corpse Tongues (Tales from the World Bloom 2)

The Journey of the Precious Flower:

One day when Halar was looking upon the dirt, he saw a tiny seed, glittering amidst the soil like a gem. He planted the seed in the ground and watered it. He began to build a wall stone by stone around the flower and began to plant a garden with the flower at its center.

You might notice, my princess, that this story reflects that of the creation story. Many point to this story as the first evidence that he is the Avatar of Aman who Dreams the World. Remember, dearest one, as surely Matron Ilisa has taught you, that gods and demons alike incarnate in their world, often while still maintaining their reality as transcendent beings at the same time. Aman does not vacate his throne in the heavens to become Halar, but rather the principle of his being which is integral to the world itself must manifest in the world. This is perhaps too much theology for an eight year old, but I am your teacher as well as your story teller. I can already hear you throwing a boot at me and saying, “Get on with it, you chitinous bore!” So I shall.

He looked to Mhina who Darkens the Clouds and commanded, “Send down rain for this seed to grow!”

And so the goddess sent down rain on the seed until a leafy shoot grew up.

He looked to Satu who Burns the Horizon and commanded, “Send only your most favorable rays to nourish this seed!”

And so the god sent his radiance down upon the leafy shoot until a beautiful flower bloomed.

And so Halar cared for the seed and the garden and it grew up more and more beautifully under his care. He did this for a year and a day.

After that time, the wicked King Bharak, avatar of the demon Vhanu who Squashes the Butterfly, came upon Halar’s garden and saw the flower. He was immediately overcome with a desire to possess this beautiful thing and stole it. Upon returning with water for the flower, Halar saw that the flower was missing and immediately followed the tracks of the King’s cart to his wicked kingdom of Ralishta. He fought with the Thirteen Immortal Guards of Ralishta for a year and a day until he finally arrived in the court of the king.

As you grow into your authority, dear one, it is essential for you to recognize mentions of Ralishta. Though the ancient enemy of Halar has been quiet for many years, there are always rumblings of its return. As these rumblings grow louder, you must learn to understand Ralishta. This story is, as far as your humble tale weaver, is a mostly accurate account of how Halar and Ralishta first became enemies of one another, yet this is hard to confirm. The other nations shun Ralishta and their scrolls are beyond my reach. One imagines they tell this story quite differently.

He confronted the king and they did great battle, but the fury of their blows caused the flower to wilt and Halar instead bowed before the king, “My king! Truly you are too strong for me! Since you are so mighty, let me only serve you and I will learn from your power and wisdom!”

This stroked the ego of the wicked king, but he would not let his guard down around Halar, so Halar served him for a year and a day, all the while watering and caring for the plant, fighting against the evil aura attempting to kill it while it remained in the king’s domain. After the time had passed, the king truly believed his enemy was cowed into being a humble servant, and so Halar attacked him while his guard was down and slew him, rescuing the flower and bringing it back to his garden.

After planting the flower again, it grew large and transformed into a beautiful woman. She said, “I am Maia. You have cared for me for three years and three days and faced dangers such as no man has ever faced and even became the servant of your enemy for me. If that is not love, I do not know what else could be!”

She embraced him and their love bloomed.

The pun here was my doing. I’m not sorry. 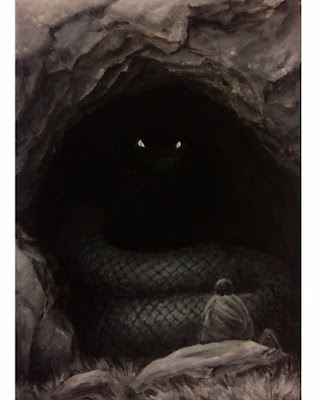 On the Vengeance of the Three Daughters of Bharak and their alliance with the Serpent Seyam:

The journey’s of Halar are usually broken up into Cycles, each comprised of three journeys and ended with a story of some calamity or great change that sends Halar back into the world to adventure once more. There are many non-Cyclical stories that your humble storyteller will likely not mention in this record unless they become necessary for your understanding.

The three daughters of King Bharak of Ralishta mourned their father, yet these children of the wicked king were full of cold fire, and they were not long in their sorrow. While the youngest daughter buried their father, the eldest two immediately sought Halar’s life.

I found some strange scrolls indicating here that Bharak never truly died, but that by the foul blessing of Vhanu and the strange arts of the Ralishtans, he yet lives beneath the Palace of the Deathless, preserved there to teach the secrets of life and death to his youngest daughter, the current queen of Ralishta, Narathi the First Scholar of Flesh. These scrolls are a tiny minority, and yet their report is disturbing. I shall have to tell your mother of this.

Ozythai and Meralla went to the jungles of the Vatiar seeking the young saint, but they met Seyam first. With them were the Thirteen Immortal Guards for by Vhanu’s “blessing” they could not be killed, but rebuilt themselves, painfully and hideously. Seyam’s great head lowered from the mighty branches of a Korok tree.

“Tell me, little ones, descendants of the Vatiar who fled my gentle reign, do you come to offer your allegiance and worship as is proper for your lord?” Seyam’s words were venom, for the Ralishtans did flee the forest to escape their enslavement to Seyam. To this day, the Ralishtans are ashamed of their time of servitude.

The two daughters were proud and fearless, atop their seat on the back of the largest of their Immortal Guards, the Headless Giant Ramak, though they recognized that all their guards could not triumph over the massive serpent, it would cost Seyam greatly to face them.

Meralla, who was called Corpse Tongue, replied, “Oh, great snake, do you permit anyone to mock you or is there some pass we might purchase? Have you issued such permission to Halar? We have heard rumors. The monkeys laugh as they recount how he evaded you and how his disciple freed your prisoners. How much has Halar paid you for such liberal permission to mock you?”

"SSSSSSSSSSSSSS.” Seyam’s hiss shook the trees and Bardju who Tips the Mountains with Snow turned over in his slumber.

Bardju does this a lot. It seems like an ongoing joke in these scrolls. The sherpas of the Dagger Heights say that avalanches happen because Bardju taps on the ceiling of his home with a broom to quiet noisy hikers.

“No two-legged creature may mock Seyam! I would crush that insolent child in an instant! I will consume his soul and feast on his cries of agony! I will drip-feed him my venom until his veins burn him alive from the inside!” The serpent was wise but prone to pride and anger. Meralla knew this.

Meralla spoke, “I knew Seyam the Magnificent would never submit to such disrespect! This boy is beneath your notice, an insect before you, mighty one! The child has killed our father. He must pay. Allow us to serve you, find Halar, and draw him into a trap. You need not lower yourself to bother with him, we shall deliver him to you!” Meralla knew that Seyam could not find Halar, since he lived among the hidden villages of the Vatiar which cannot be found without knowledge of their secret arts, and yet she knew the snake would never admit to this weakness.

The serpent was not stupid. Seyam knew when he was being flattered, but this usually did not reduce its effectiveness in persuading him. This scheme pleased the slothful snake and so he saw no reason to argue.

“Very well, children of the Vatiar, you may enact this scheme. Once you find some suitable bait, draw the insect to my cave in the Shattering Star Abyss. I will torment the boy there for an eternity before he finds merciful death.”

Seyam’s head raised into the darkness of the great tree’s canopy, until his eyes were yellow stars gleaming in the dark with hate.