In the land of Overtia everything is exactly what is seems to be. 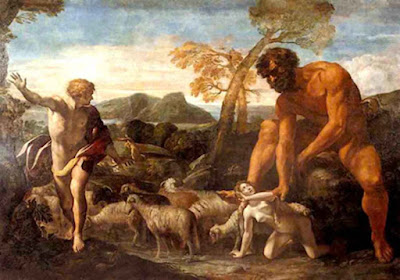 Gigas Divinitas is the species we have come to call gods. They are native to the celestial sea of Ouranos. It is known that there are other species in the Gigas genus, such as Gigas Titanicus, often called giants who are thought to be native our sphere and this sea, but are suspected to be losers in some ancient cosmic war.

Basically, heaven is up. The gods live in the clouds and in the spheres of heaven.

There are all kinds of minor gods who have made their homes in sky castles and golden sky yachts. Your average god is a large humanoid creature with varying numbers of limbs, heads, and secondary features. The gods are shapeshifters but rarely use this ability to take on any shape but one that distinguishes them from other gods. Why would they want to appear like any kind of inferior creature anyway?

For one of the endemic features of the gods is pride. All gods have God Complexes and this should surprise no one. The lesser gods are petty tyrants, bullying worshippers into praise and holding raucous parties on their sky yachts. Gratefully, the gods are mostly pretty distant, uninterested in boring mortal matters, and terrifically lazy. They can rarely be bothers to perform a divine act of judgement or even to protect their worshippers as they are meant to do.

The other important feature of divine life is worship. All worship fuels the gods and gives them their divine power. The more divine power they have, the bigger they get. I mentioned earlier that the gods live in the spheres of heaven. This is true, but the gods also are the spheres of heaven. The gods that receive the most worship have already ascended to heaven and have taken on forms appropriate for gravity, that being spheres. The sun in the sky is Sol the Bright Lord. The moon is Luna the Mother of Shades. All the spheres in the sky are the greater gods, this is why they all very clearly have faces.

In the Age of Night, mortals attempted to stop worshipping the gods and hid their dead from the Mother of Shades in an attempt to take power over their own destiny. The Mother responded in anger and mortals and the gods entered an all out war. This eventually ended the age as the Mother's forces failed and she called upon gods stronger than her, summoning the Bright Lord and heralding the Age of Day.

In the aftermath of this, mortal resistance was destroyed along with most civilization being buried, yet the demand for worship for all the newly arrived gods was at an all time high. Mortals still had leverage and so agreements were crafted and the clerks who were meant to oversee this new bureaucracy of praise eventually came to be known as clerics. Still to this day clerics mediate disagreements on behalf of mortals as per the ancient treaties and pacts and are granted special amounts of divine power as compensation as per the 39th Treaty of Mediators, paragraph 6, subsections 1-53. These lengthy volumes of divine law have become holy scripture and many clerics have forgotten that the purpose of these agreements were for the benefit of mankind, to the surprise as no one.

Divine power is literally contained in the bodies of gods. It can be used to many different effects as you might expect. The primary nature of divinity is authority. The gods have taken a special place in the cosmic order and so are granted authority by the universal mind. Divine acts temporarily awaken the cosmic consciousness of both animate and inanimate matter. Many wizards have tried to crack the Secret of Divinity to no avail, but even the attempt often ends up with the wizard being flattened by a large rock thrown down from heaven. Good riddance.

Angels are the sustained granting of cosmic consciousness by the distribution of a select amount of divine power into one of the god's body parts, usually for a very specific purpose that the god is too lazy to do themselves. Basically, they take off an arm, eye, or other member and give it some divine power and usually but not always wings. For lesser gods and lesser angels, they do not have enough divine power to change their forms in meaningful ways and these poor divine messengers end up stuck as eyes or arms with wings if they are lucky. Also their jobs might vary widely. No one wants to be poor Moraliel who was a hand detached so some lesser god wouldn't have to wipe for themselves.

For angels created by greater gods, they often have the power to change their shapes and tend to take on ostentatious shapes of beauty or strangeness because why not? Greater angels can actually be more powerful than lesser gods. Angels, being literally the universe awakened are far chiller and more empathetic that their divine creators.

Death or the Lack Thereof

Gods don't die easily. Their bodies will disperse into divine power and reform eventually though this can take many years for lesser divinities. There are some ancient weapons from the Age of Night that are said to be able to permanently kill gods. Oh no, you better not go looking for those...

This is one of a new series of blog posts I am going to do about a very literalist fantasy setting. I am going to try and remove as much of the spiritual and metaphysical stuff from fantasy as possible and just follow that strange logic to its end. We shall see more of the strange world of Overtia and what poor suckers live there.