The Gas Mask Gospel 1: The Apostolate of Arym

The world is at war!

So the papers say.

The truth is that the world is war. War has consumed the world until nothing remains but war.

The whole continent is nothing more than barbed-wire-christened trenches crawling with rat-fed soldiers, casting their divination rods in the desperate attempt to get some word from command unsure where the enemy is, unsure who the enemy is.

They flagellate themselves. They cut the prayer marks into their skins. They cast lots to see who will be sacrificed. Some pray they will draw the short straw. They listen to their Chaplain Commanders preach messages of salvation. Soon the Iron Angels will come! A new Battle Saint will come to save us!  The old gods will never forsake the land! Those that die will be martyrs and find salvation and eternal life!

The gods do not listen. Command continues its terrible silence if you are lucky. Peace is a distant dream.

The world is war. 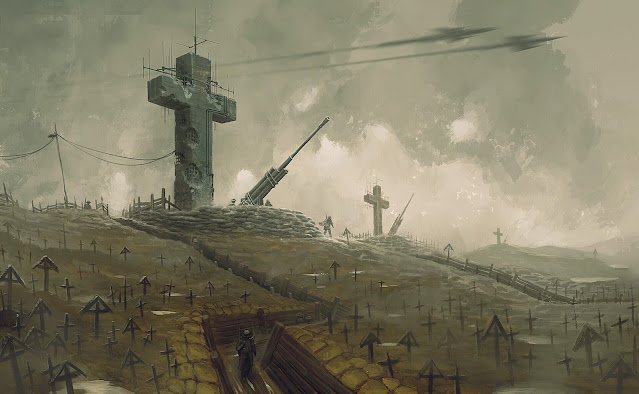 Inspired by Never Going Home, The Silt Verses, the Magnus Archive, and art by Mike Franchina.

The Final War rages on an alternate earth setting. All experts blindly agree. The world will end at the climax of the war or one faith will be triumphant over all. Think World War I-ish but a massive religious war chock-full of cosmic horror monstrosities.

Today we are going to be looking at the first of the factions and its subfactions:

The new revelation changed everything. The small island of Arym was a forbidden island of uncontacted people since time immemorial. It was a place totally forgotten and irrelevant to the powers that be for the longest time, even though the Church had long-standing orders to forbid all mentions of the island and for none to be allowed near.

When the seekers came to Arym, they were scientists, historians, theologians, all who were looking to uncover the secrets of the island and why it had been so forbidden. It was said that there they witnessed the New Revelation, the Final Science of Divinity. They finally understood the nature of the gods, how to control them, and, moreover, how to create them. This is the greatest power of all, for changing the gods changes the worshippers too.

Many enterprising nations found this New Revelation to be intoxicating for different reasons. The Apostolate is more of a loose alliance of forces destined to clash with each other once the war is done, influenced by the grand visionaries that are the Apostles of Arym who have taken up positions of power in their governments, yet even the inevitable clash of these different powers has a kind of method to it, a calculated sort of madness, perpetual revolution leading towards the great climax of history.

President Isaac Marion was a well-traveled man, coming from old money, steeped in European philosophy, fueled by relentless American ambition, and ever occupied by a wide variety of curiosities. His generous contributions to archeology, science, and the arts opened many doors to him, including a door that led to Arym on that fateful voyage. He was one of the few who witnessed the New Revelation and survived. None of them left that place unchanged, but for Marion, everything he was simply intensified. With a kind of charisma that few men can match, he seized support from urban elites and catapulted himself to the presidency, preaching the coming of a new golden god of freedom. Let weak men bow before the coming of the New Man, but let the strong see in him a mirror and rejoice!

Gene-spliced and surgically altered soldiers with drugs for their rewards and poverty at their backs march on relentlessly, chanting the mottos of their corporate sects as their titanic lesser gods of brass pipes and screaming flesh lead the way. Leviathan Motor's own Levi the Leviathan's back is weighed down by loudspeakers, shouting out the sacred jingle and it spews forth black death from its many-toothed maw. On a rare day, the golden form of a Saint Executive might appear to show all who see what they might become if they only work hard for their masters. Within these metallic shells are shriveled rotting corpses of men who should have died long ago, held here in torment by their own "superiority."

It is not known exactly why Vladimir Lenin was on that fateful voyage to Arym. No one really knows who organized all these champions of modernity together, yet this young Marxist revolutionary was to be transformed utterly by the New Revelation. He beheld a great sea of blood, filled with the faces of those slain under the boot of capitalism, the endless hoards of the oppressed and downtrodden called out to him for vengeance! Thus, he declared the coming of the Red Tide, the Mother of Vengeance, the Many Who Scream as One. He created his first saint out of the hideously mutilated and conjoined bodies of the Tsar's family and supporters.

The priests of the Red Tide all wear red masks with expressions of rage. They like the rest of the people in the Union wear clothing that hides any kind of difference in body type. There is some question of whether there is anything beneath the clothing of these priests or if they have truly relinquished their identity and joined utterly with the Mother. The Sainthood Camps take in the reactionaries and pump out thousand-limbed crawling saints to be equipped with metal armor and mounted with mighty cannons.

Arym remains one of the great mysteries of the war. The leadership of Arym itself is equally mysterious. The Apostles have all gone to run their own empires, supposedly, though some say a man simply known as John has remained on the island and who is one of the unknown Apostles, but the rumors do not say much about whether he is truly in charge. Most intel agrees that the Disciples are in charge, the most human things on the island and perhaps the only remaining natives. Little is known about the Disciples besides their absolute loyalty to the Apostles. It is said that they continue the divinity experiments of the Apostles and make their research known to all Apostolic factions.

The troops of the Arymite Core are few in number but great in strangeness. Their troops are utterly silent death commandos followed by long-legged monstrosities mounted by speakers that blast forth in-utterable blasphemies that can cause minor Sainthood amongst the enemy troops. Insectoid Seraphs fly over the battlefield bringing swarms of pestilence and decay. Multi-saints, crying out in hideous agony from their many competing holy mutations, are let loose to unleash indiscriminate destruction.

Enemy soldiers hesitate to approach Arym not only for fear of their lives but for their very souls.

There are other Apostles not mentioned here, but we may yet return if there is interest. The other factions: the Holy Empires of Christendom, the United Pagan Front, and the Deserters are yet to come. 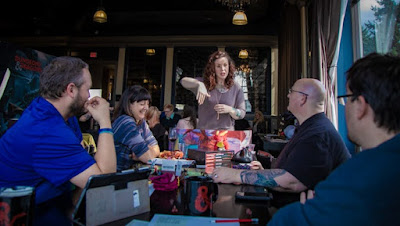