A Timely Review of Through Ultan's Door by Ben Laurence

Through Ultan's Door is a zine by Ben Laurence with art done by Huargo Illustrador, Russ Nicholson, and Gus L. Layout and design by Matt Hildrebrand. I honestly can't say what it is statted up for. I am but a noob. 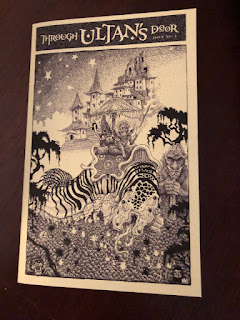 Let us lay out a map of this oneiric landscape and we shall begin our journey through it, first to the alley of art, then to the escarpment of ease of use, then to the castle of creativity, and stopping at the corridor of conclusion.

The book is gorgeous. There isn't much else to say. Every piece of art is incredible, maybe with the exception of Ultan's Door, itself, which I found to be unclear, in contrast to the highly detailed art elsewhere. The cover was the thing that made me immediately decide to pick up this book as soon as I saw it. It really does look like something that could have come from beyond the veil of sleep as advertised, highly evocative and filled with bizarre and dreamy flavor. Huargo really ought to illustrate a copy of The Dream Quest of Unknown Kadath. That would be awesome.

Full disclosure, I have read nothing else of Ben L's work. I will certainly keep an eye on it now.

The map is very pretty, but it is a little hard to read, though I will return to that shortly. One last thing about art is that it feels like quite a few pages pass without any art. I know the layout is being prioritized but the art is so good that I want more of it.

On to ease of use, this book bends over backward to help you use it as easily as possible. The cover detaches, containing the map on its back. There is a slip containing all of the monster stats on an encounter table that also comes with the book. This is genius and ought to become standard for the industry.

The only downside to this is how much more treacherous it becomes to store this as an artifact. I want to keep it on my shelf forever, but lots of pieces do tend to get lost or bent.

Every time a monster is mentioned as appearing, stats for it are included. This might be thought of as unnecessary but I appreciate the willingness shown to make absolutely sure that you have easy access to the stats you need at all times. It is also helpful in the eventuality that you should lose the Encounter table slip.

I think the worst thing that I can say about the ease of use is that the map is crowded and some of the numbers are a little hazy. This might be a problem with my copy. I can't be sure. If others have had this problem, say so in the comments.

As for creativity, this is a dazzlingly original book. The idea of exploring a dreamscape is not new but the nature of this particular setting is incredibly creative. The dungeon, the Ruins of the Inquisitor's Theater, is a very novel idea. This is the place where inhabitants of the city of Zyan used to put on their shows of justice. Punishment must be public and elaborate as decreed by the strange and macabre god of the Inquisitor's Guild.

This blends torture, puppets, Venetian masks, and bizarre religion. It is quite an interesting mix. There are also mute outcasts that speak with pan pipes. Pale anthropomorphic pigs with children's hands stalk the Theater to find food for their brood mother.

I think some rooms could do with a few more things in them. I feel like the swine or the guildless could have put in a few more traps to guard their territory. It also seems like there is little that you can do to deal with these creatures other than fight them. You can't really communicate with the guildless, considering they speak in flute. The pigs just seem interested in killing anything else in the Theater. It is implied that you could engage the pigs in a legal debate, considering they have eaten the fruit of the tree that gives you knowledge of the Zyanese legal code. This could lead to a court scene where the swine judge the PCs, but little thought seems to be given in the book to possible nonviolent solutions to these problems.

It is implied that you could offer devotion to Azmarane, the Shadow Weaver could give you her gift, implying that you could forge an alliance with it at the cost of becoming a servant of its twisted deity, but its base state would seem to be hostility towards anything that could be considered an intruder. This is not a good foot to start on to have a dialogue.

In conclusion, this is a really good book. It has its flaws, but I think its creativity and ingenious design more than make up for its shortcomings. At a measly 13 bucks for a physical copy plus a pdf, this is well worth your money and your attention as further issues come out. Honestly, I would find it hard to run this without having further zines, as I am sure players might find their way to other parts of the world before they finish with the dungeon. They might just hop in that boat and head off to the next zine's area before it even comes out and that would put me in a pickle.

I wait with baited breath for more.