Thematic World Building: An Attempt at a Thematically Whole Setting

Have you ever asked yourself why you have this in your setting? There is absolutely nothing wrong with having purple, cannibal halflings in your game for the express purpose that it is funny and you like it, however media outside of games often attempt at creating a world with the intent of representing themes and this method of worldbuilding can also produce interesting results.

As I wrote in the past here, there are different methods of worldbuilding, including not really having a setting and building it as you go. On the side of planning a detailed setting before your game, there are even more methods. Writers of fantasy will often write aspects of setting around a theme, having the theme in mind first before the worldbuilding begins.

Let's try that but for games!

I just watched Ralph Bakshi's "Fire and Ice" and that gave me the idea for a theme to build around.

Theme: Evolution, fate, and the passing of civilizations and peoples to be replaced by others.

Requirements: We are still building this for a game so while I think it is perfectly fine to make, forbid, or use races in your game, I want to stick with the core ones to make it easy as possible for use in most games. 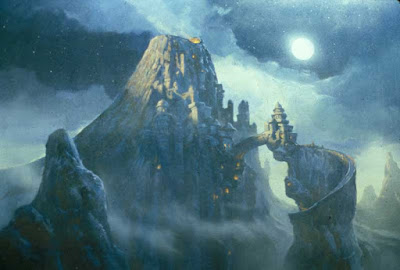 From Fire and Ice

Humans: This is the dawn of human civilization and it has arisen with surprising speed and force in the power vacuum created by the downfall of the elves and dwarves before them. The first great cities, faiths, and nations have burst into being over the past hundred years. Most humans still live in barbaric tribal gatherings hidden away in concealed corners of the world or in savage places that they had to claim while greater powers ruled safe and fertile lands.

They worship gods representing the savage forces that pushed them to become strong to survive in a world out to kill them: the vulture-headed Dehaka Desert Mother or She Who Drives the Winds that Pluck Meat from Bone, saber-toothed Graeghoth Grim Father or He Who Feeds the White Wolves in the Wastes, and other beast-deities.

Man has long lived as prey to Elves and Dwarves. Elves would literally eat them or capture them to be slaves in their battle pits or torment rooms. Dwarves viewed men as a nuisance to be expelled from places where they sought to build or dig.

In this way, Humans are prime examples of an evolutionary strategy which is to survive by learning from hardship, naturally giving them a fighting attitude against the coming Draeki menace.

Elves: Elves were the highest form of life in this world, rising up after the death of the Elder Things which ruled the world from obsidian towers, many of which yet stand. They stood unopposed by other sentient races for thousands of years, as the dwarves had still not yet reached their behavioral modernity and humans would still be little better than apes for longer yet.

This advantage allowed their culture to rise to a level of advancement still unseen by any currently existant race, gaining power with magic and science at a fairly rapid rate. As the other races rose up, they gained a sort of haughty cruelty, drunk on empire and power. For thousands of years more, they slew and oppressed dwarves and men in their various stages. Their culture reached the peak of decadence and cruelty before a malaise began to take over, boredom sinking in.

They had seen rises and falls and many began to believe that there was nothing that could be done against the cycles of fate, that all action simply caused more suffering. All effort was simply a resistance against the inevitable.

Their elaborate cities of amethyst and mother of pearl stopped growing and the songs of their great temples began to lose fervor. At this time they discovered the Dream: a new psychic realm where they could have anything they wanted and be free of all suffering. They retreated into Dream Pods and their cities stood like abandoned tombs, full of the coffins of the living dead.

Adventurers will often raid these essentially empty cities and have to deal with the jeweled, magi-tech guardians and cruel traps to protect the eternal sleepers.

Those few elves that remain awake are those that protested against the pods, liked the older days, or some simply were medically unable to use the pods. Elf adventurers will rarely if ever come across another of their kind. Those that integrate into human civilization often find themselves in places of power and influence, using their technology and magic, and are often fairly amoral compared to your average human.

Elves play especially well to the prey-predator/higher evolved-lower evolved aspect of this setting plus their civilizations downfall into decadence and impotence mirrors that of Rome's or Byzantium's.

Dwarves: Dwarves thrived by building beneath Elven notice in the dark under the mountains survival in the mountain depended on staunch family units and social order in a militaristic front against the dangerous creatures of the deep. Their stories of heroism build up each new generation bolstering their identity and the power of their heritage. Dwarf society maintained its cohesion even in its separation into castes of function through the overarching stories of their people, their collective memory binding them together and making them strong.

Thus, the cruelest fate that could have befallen them was forgetfulness. This is exactly what the Elves did, cursing them with a plague of forgetfulness. Entire communities would awaken not knowing who they were or where they came from. The curse lost its potency after its initial deployment but now all dwarves are cursed to eventually lose their memories. Dwarves, already a people heavily invested in the written word became obsessed with it, wearing garments written with their names, carrying around scrolls meant to act as their memories. However, this was not enough to prevent their downfall from Elven minions and the collapse of most of their cities. Few places remain where dwarves hold power, and a fair few have filtered out into cities naturally getting into the groove of craftsmen simply by relying on extensive muscle memory.

Dwarf adventurers will typically be looking for evidence of their identities, taking with them crests and emblems to see if their family yet lives and to discover who they are.

This emphasizes the fall of civilizations aspect in that much of what constitutes a civilization are the great narratives which define us. Without access to such important stories, little binds a culture together.

Halflings: Their own word for their people approximately translates into the Prey Folk or the Hunted It is said that the Creator gathered all the first creatures together and gave each a gift to pass on to their progeny. To the tallest child, Anure, he gave knowledge, thus the elves came to be. To the second tallest, Imal, he gave courage, thus the humans came to be. To the third tallest, Beor, he gave rememberance, thus dwarves came to be. His smallest child Pa'ar, he looked down and smiled, thus he gave him the greatest gift of all: fear.

Halflings make their home in burrows and tunnels, digging out multigenerational homes under hills. Some humans call them rabbit-folk because they breed very quickly and have many children and have powerful hind legs which let them flee very quickly.

Other humans call them the small folk and some cities have Halfling curriers, though often Halflings have a hard time overcoming their fear and resort to theft, thus Halflings can also be distrusted. Halflings might be great in numbers but predators get many of them. Draeki like to hunt and eat them. Their entire society is about knowing ways of escape: hidden hand gestures to signal friendship, signs indicating a hidden passage, symbols for a safe house, and more.

These are a little Watership Down and a little Chromatic Soup 2. My friend Sam inspired some of their mythology. They represent another evolutionary strategy and are the actual bottom of the food chain for sentient creatures.

The main monsters of the world are the Draeki, as they are the predators of sentient creatures, and, in their own estimation, the highest evolved sentient creatures on the planet. The thing is, it is hard to refute that assertion. The Draeki look like pale, white-haired men but with sharp features, not merely angles like elves, but genuinely sharp, their bodies bending at hard angles and their teeth pointed like needles. Their claws are long and sharp like knives.  They stand taller than human beings and many have powerful magical abilities.

They wish to annihilate all other forms of sentient life, establishing themselves as the only rulers of this world. They strange cities out of shimmering matter that they create with their magicks. But they do not spend much time in the constructions of such things but they are places that the Draeki like to keep absolutely pure, untouched by any but their own kind. They have their fun in forests and wilderness lands, hunting the undercreatures that dare call themselves sentient.

However, they are not many and do not breed quickly. This is their greatest weakness. They can be overwhelmed by numbers.

The Urks are subhuman creatures, literally a collection of the less evolved creatures that yet remain. They are earlier forms of the current races, especially humans. They have a hard time organizing as complex language is beyond them but sentient creatures can rally them as minions, promising them the status that they have been denied. They are creatures of envy, too animalistic to be human, too human to frolic in blissful ignorance in the fields.

Magic is mostly psychic abilities that manifest as a beneficial mutation rather than arcane knowledge, however, religious symbolism quickly bound itself around their use and many humans who have the Sight or the Gift are sent away to the temples to be taught. Elves are born with such abilities and play with toys designed to teach them to use their abilities as infants.

Surprisingly all dwarves are lightly psychic. Their bonds to each other and their united mental front can cause them to be physically bolstered in combat. Few powerful psychics exist among them but those even a little more powerful often become Storytellers, dramatically retelling the tales of their people to psychically bolster their gestalt field. For such dwarves, the loss of memory is slower but far more tragic.

Powerful psychics are perfectly capable of manifesting abilities that emulate magic. Draeki bend space at a whim, making them capable of going faster than their already incredible gait or even teleporting vast distances.


I don't know what I would call this setting. Let me know if you have any ideas and if you would like to see any more of this.